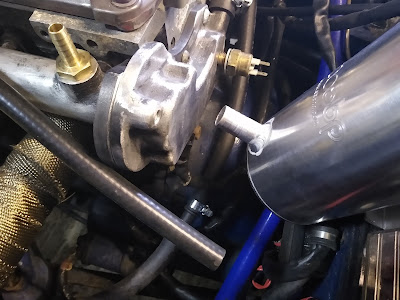 The catalogues & websites never give enough information, the Merlin Motorsport site gave a height & diameter for the tank, but it turns out that was just the tank, not the mounting bracket or the length of the hose stubs or anything, so when I put it on the car, this happened.

There's no way a 19mm hose it going to make that corner, so what to do?

I wondered about swapping the positions of the fuse box & the tank, so the tank was outboard & missed the engine, but that would mean complex pipe runs & wires crossing hoses & buying another sheet of aluminium. 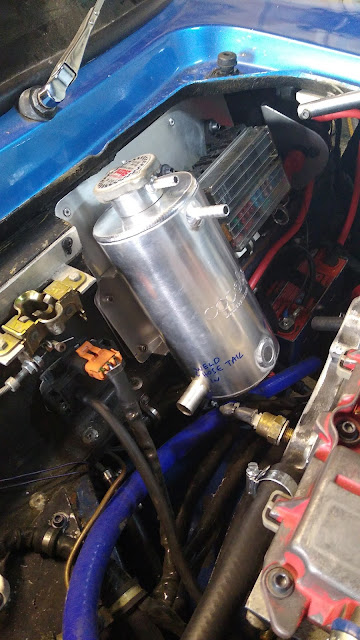 I wondered about shortening the stub & using a silicone hose elbow, but that always looks messy with hose joiners & jubilee clips & there was no guarantee it would work. In the end I bit the bullet & sawed up the brand new £80 tank. I cut the hose stub off, taking as much weld as I could with it, cleaned the weld off the outside & drilled a new hole in the side of the tank, drilling up the sizes & finishing off with a sanding drum in a dremel to make the hose stub a nice tap fit in the hole.

The mounting flange also needed messing with as it was too wide to fit between the bonnet catch & the fuse box - this was a good thing though because I used an offcut to make a plug to fill the now redundant hole in the front of the tank. My theory being that it's the same aluminium as the welded on bracket, so it should pose no problems welding it.

So that was today's project, tomorrow I'll drop it into the excellent Ashby Welding in Church Crookham who will weld up where I've marked & then it's just getting the hoses sorted. 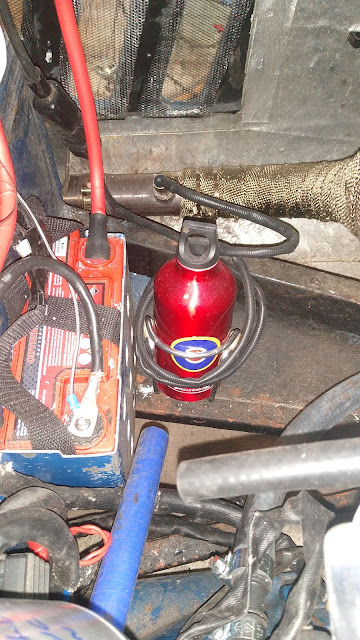 In between all this re-work, I fitted an oil catch tank. The car came with a billet alloy tank supported on a very dubious bracket. Being machined from billet it was very thick & heavy & blue anodised, so I put it on the Quantum which could do with some weight ahead of the front wheels. For the Stylus I found an old aluminium bike bottle & a nice light alloy cage & made up quite a nice folded bracket to secure it to the chassis rail next to the exhaust, the breather pipe will go in the top & I'll have to remember to empty it from time to time. The wire wrapped round it is the yards of wire on the lambda sensor, I should shorten that really.
Posted by BlatterBeast at 17:49