Hoorah! after a bit of a disaster yesterday (idling WAY too fast, backfiring, lumpy) I took the whole injection system off the engine, all the throttle bodies off the mountings & adjusted one at a time & closed the air bleeds so that I couldn't blow through the main venturi (I know it's not actually a venturi because they're not carbs - but you know what I mean), so I knew each butterfly was SHUT - properly SHUT. Then carefully carefully re-fitted them onto the mounting rail & again checked they were all SHUT at the same time. 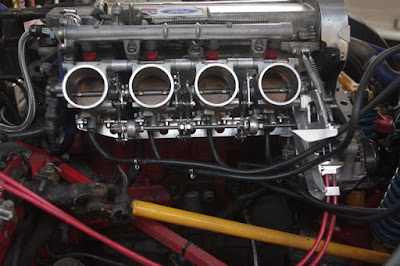 Only when they were all mounted & adjusted okay did I hook up the systems, open up the air bleeds & go for a start. IT WORKED -almost nicely. The four way manometer carb balancer was already on, so it was just a case of adjusting the air bleeds until they were all in sync & it was idling nicely. 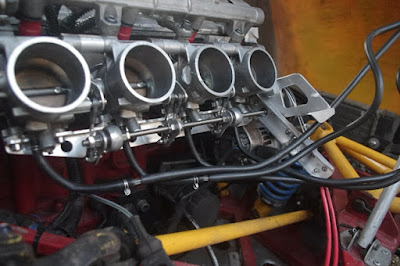 There are still a couple of jobs to do, I need to adjust the pedal for travel & so it returns all the way to idle on it's own, make a cable support for the pedal end & some more fettling, then I think I'm done - it's been a lot of effort, but soon I'll be moving on the to clutch pedal.