Having had trouble sleeping, I then slept through the alarm, but still had time for a breakfast before bidding the folks in the hotel farewell & hitting the road.


The sun was shining brightly as we headed south through some of the places we’d seen on the southern loop & were soon entering one of the Cumbrias - we saw at least three signs welcoming us to Cumbria, all 20 miles apart. Don’t know where we’d been the rest of the time.
Somewhere in this part of the trip (again with me leading) we rounded a corned to find a young woman in HiViz waving her arms above her head. I hit the brakes hard & the cause of her waving turned out to be a junior school sponsored walk - along a B road with no pavement. She waved us forward, I didn't move, she waved us forward again, I pointed out that her colleague at the other end of the troupe had just waved a seven tonner towards us. What I thought had been damsels in distress, turned out to be damsels in dispute. As we passed the class of 8ish year olds they were all quite excited. 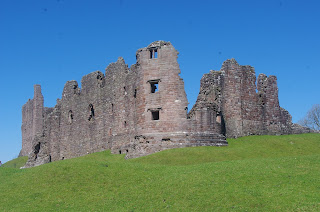 We stopped for “lunch” in the same ice cream parlour as we did on the southern loop (the one with THIS castle in the back garden) & headed for the forest of Bowland. This was good news as by now it was hot & some time spent under trees would be welcome, except that “forest” is something of a misnomer as there really aren’t many trees at all. We did find a shady spot for a rest at one point. 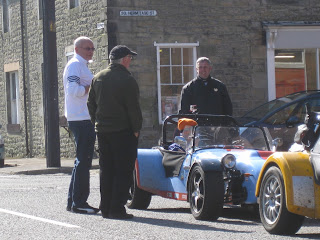 At another rest, we pulled up in a village that could’ve been the set for Coronation Street. Solidly built houses with the front doors opening onto the pavement & the locals standing at the front doors chatting. 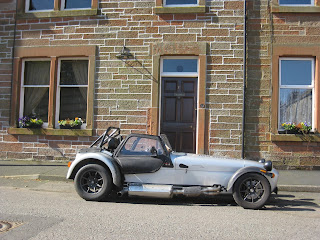 By now it was three in the afternoon & really quite uncomfortably hot, so a while dicing with death on the M6 increased the airflow & was quite welcome, we were not so happy about the traffic jam afterwards. Sitting next to a hot transmission tunnel with the sun beating down is not a good place to be.

﻿
At one stage the traffic moved from two lanes into one. Cars were queuing on the inside lane, the outside lane was shorter. One of our group went up the outside lane – sensible in my opinion as it keeps the tailback short & not blocking any previous junctions. I went to follow him, quick-as-a-flash a guy in a non-descript rep-mobile moved into the outside lane to halt my progress. Not to be out-done I mirror-signal-manoeuvred into the space he has vacated & wouldn’t let him back in.


He wasn’t a happy bunny, but I was the one complying with the highway code after all.
By the time we reached the hotel we were all rather overwrought – except for the man in the air-conditioned Toyota of course. We were given our keys & as seems to be some kind of rule in the hotel industry, I was given a room in the eves up three flights of stairs & through at least 4 fire doors – by the time I got to it I’m not sure I was still in Wales.


Being in the eves, under a dark Welsh slate roof, my room was stifling, but I opened a window in the corridor, the one in the room & propped the room door open & a breeze soon flowed. A cold beer helped too.
Posted by BlatterBeast at 17:02