Each year the best car club on the planet - the Southern Kit Car Club has a "Car Limits Day" at North Weald aerodrome, this year I went for the first time. So yesterday I was up before the sun & on my way to Egham to meet with David T in his tiger Avon & Crunchie in his brand spanking new Zenos E10S.

I was late - I missed the meet point, got into all sorts of a tangle with the one way system & various dual carriage ways & eventually re-found them 20min late. Fortunately due to a clear M25 we were early to the venue so no harm done. 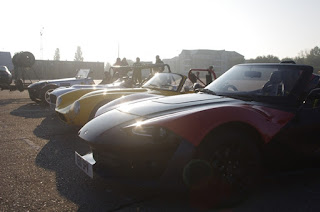 The day began with a briefing & the signing of waiver forms before we headed out for a "high speed curve" test, we went barrelling along a straight & had to turn at the end, the idea here was to get the highest reading on a speed gun without spinning off the curve. I found this incredibly difficult to judge as there were very few points of reference, but at the end I was about the middle of the group, so quite satisfied. 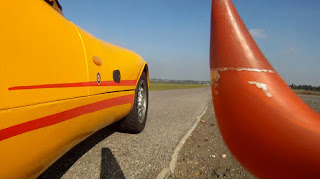 Then we were split into two groups & each group had a small circuit to drive against the clock. This was much easier to get a grip on. Accelerate into a wide area, round two cones, accelerate along a straight, turn round a cone at the other end, accelerate back, round the cones & brake to a halt. This was great fun though from the footage I seem to have forgotten the camera mounted on the side when passing cones at 50+ mph 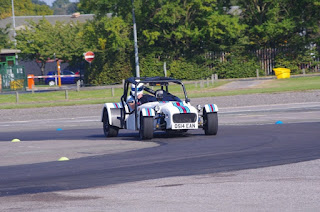 After this we swapped circuits with the other group. The second circuit involved accelerating to a cone, round it & back to a twisting section of tarmac, down to the cone again & back to stop between two cones. Again huge fun, with the twisting tarmac's curve tightening markedly before changing direction to unsettle the cars. On each run I seemed to get better & smoother, but the times stayed pretty much the same.

After lunch - when I nipped out for fuel & got lost again, the two groups were combined & a much larger circuit combining the three previous exercises was set up. So from the start line round a cone, hard right - left - right -left onto the long straight from the first exercise, round two cones from the second, back along the long straight, hard left, round the tarmac wiggle, accelerate down to another cone & hard right before accelerating back & stopping at the finish. Fantastic. The car was oversteering a little, but easy to control & my times were in the top half which I was pleased with as the Fury was giving away 90bhp to the front runners & 240bhp to the most powerful. 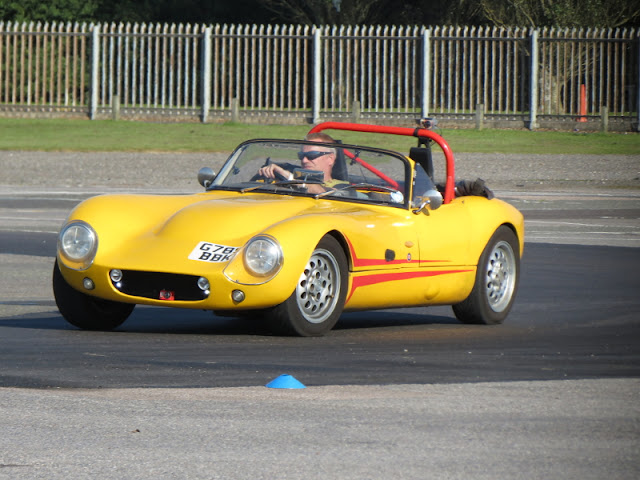 Then on the last stop of the last run, I pushed the brake just a little harder, there was a pop & the pedal went down to the bulkhead. On the way bach to the "pits" I found I had a little braking right at the end of the pedal travel. At first I thought the pivot bolt had broken or come undone, but no. Surely the master cylinder hadn't pushed off the bulk head? No - a pool of oil under one of the rear tyres told it's own story.

I assumed the rear brake shoes must've allowed the seals in the slave cylinder to come out some how, chatting this through with some of the guys we decided the front brakes would still be working so I drove under escort (thanks again Crunchie & David T) to a local McDonalds for a coffee & a think. I decided to drive the car home as I still had brakes, it was mostly on motorway & so I could control the amount of gap ahead of me.

So I got home without further incident & the following day I stripped the brake down - it was dry, all the seals were still in place. BUT, there was a small drip of oil on the brake hose union & following that I found this:- 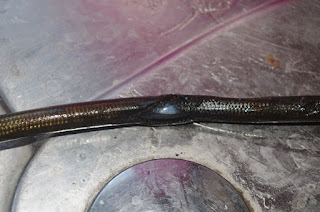 It seems a P-clip used to hold the hose in place has succumbed to metal fatigue allowing the hose to rub on the outboard CV joint housing & has worn right through the braiding & into the hose itself. Stamp hard on the brakes & there's nothing resisting the pressure & POP.

I'm just glad it happened in a safe environment, not out on the road.

So I have a little mending to do, but I think the car might be off the road now until the spring while I do some other jobs, so no real harm done.