On the fury, the clutch cable comes out of the footwell, turns through 180deg & goes into the bell housing about 5in from the footwell exit. This, I think is not a good thing, the clutch has always been stiff, with a certain amount of "stiction" & now the clutch pedal clicks when it's travelling. It started with one click each way & is now up to four, so I'm thinking the cable is fraying.

I'm guessing a lot of the problem is because the cable has to turn 180 deg in such a short length. I used to have the longest possible Ford cable running in a wide(ish) arc round the engine bay, but it wasn't much better.

So what to do? 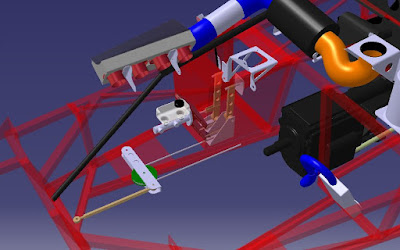 My plan is to cut the outer cable outer off & run the cable inner forward from the pedal, round a pulley in the engine bay & back to the bell housing. It'll reduce the friction to almost zero, but will it work?

One problem I identified was adjustment (currently the adjustment is on the cable outer - which won't be there) so I've come up with a natty way of using a kart track rod to adjust the pulley position. The next problem could be vibration up through the pedal (the cable will be trying to pull the engine forward on its mounts), but mostly the vibration is side to side, so that should be cancelled out. 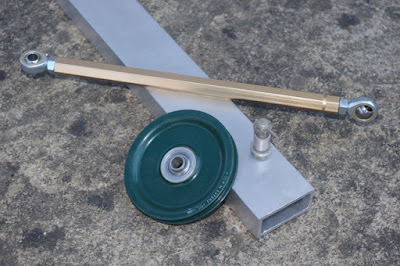 To begin I bought some alloy angle & a track rod for a Kart (to give the adjustment). I also rummaged through an old spares box & found a flying control pulley & a high quality bolt to attach it with. 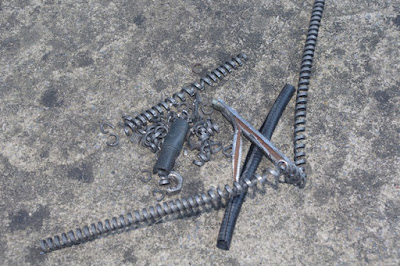 Next job was to cut the cable outer from an old clutch cable I'd found in the garage roof.

Not a quick or pleasant job by any means, but by the by it was reduced to a tangle of twisted metal.

Then in to the making side of things, I drilled & cut the box section so the pulley fits into it & one of the track rod ends attaches to one end. It needs prettying up a bit, but I'm just testing the principle at the moment. 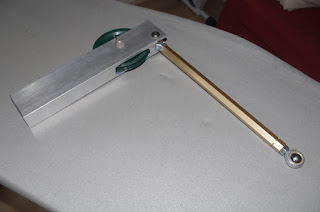 So at the moment the linkage looks like this.