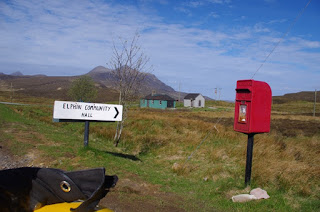 Another good breakfast, served by another very attractive waitress (by now there was a theme emerging), then I temporarily mended my bonnet (an aerocatch had broken yesterday) & I set off to find a post box with arrangements to meet the others at the petrol station in town. However, a post box can be a hard thing to find, especially with a morning sun shining over a mirror calm bay to distract me. When I got back to the meet point, a car parked in front of me obscuring my car from view & the others went past, by the time I’d strapped in they were long gone, so again I was driving alone. But the first 16 miles were the same route as yesterday so that suited me just fine. I eventually found a post box at the side of the road in Elphin - I say “in” Elphin, but the town consists of about a dozen houses strung out over a mile of road, so the postcard to my family was never going to get to my house before me. To be fair, it arrived creditably quickly considering I posted it during a bank holiday weekend 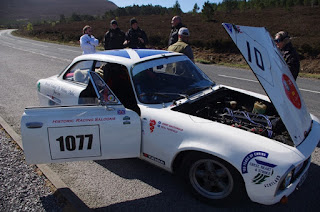 I caught up with the others while they were having a rest at a view point. As I'd been driving along a number of "classics" (Morgans, jags & the like) had gone the other way, some waved, some didn't, then I turned off their route & found the other Rogue Runners in a scenic lay by. As I pulled in an old Lancia (or possibly Alfa Romeo) pulled into the same car park - they were lost & were supposed to be a support car for the classic car run, so we looked over their car & pointed in the right direction.
Also at this point the immobiliser gremlin raised it's ugly head again, we tried everything that had seemed to work before, turning the key on & off, carefully NOT looking at the indicator lamp, but alas nothing worked, so GB called the man that had installed it & with some assistance from a more "agile" member of the party, the gremlin was found & exorcised. So we strapped in & traversed Scotland heading back to Doune.  On the way we met up with a couple of members of a Scottish seven club & again blatted some of the route with them (& again they were overtaken by our man).  The sun showed its face & the scenery was again well up to the task, though not as mountainous as yesterday. We accompanied them to a nice coffee stop & then they went on their way.

It was while we were coming through some hilly farmland that I happened across a long line of traffic following a couple of vans pulling caravans. As the road wound through the valleys, overtaking opportunities came up & I took two or three cars at a time. Until I overtook an Audi S4, now Audi drivers have something of a reputation & this one objected to being passed, so tried to close the gap & flashed his lights as I pulled in. I shrugged & overtook the next few cars when a chance came up. At the next village both vans turned off along with most of the cars behind me – except for the Audi. 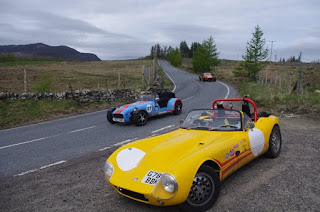 At the end of the village I accelerated up to the speed limit (yes really) & the Audi came flying passed & pulled away - thus reassuring me it wasn’t an un-marked police car – I wasn’t about to get involved in a drag race & soon the road began to twist again, so I caught up. Then in a final irony there was another queue of traffic behind two vans as the road wound into a valley with a few overtaking opportunities ……………. never saw the Audi again.