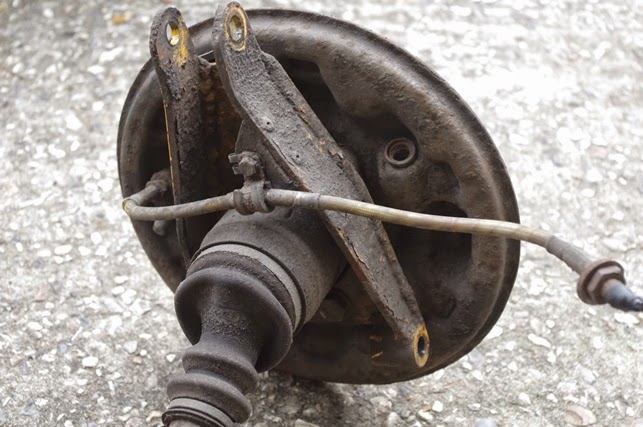 So, home from work early, get under the car & remove the rear suspension - on the near side at least. The wheel came off OK, then the brake drum, then the hub, the upright & the driveshaft came off as a unit so I didn't have to remove the big nut on the end of the drive shaft.
So far so good. Then I went for the rear wishbones - & that's where the trouble started.

I put a spanner & a ratchet on  one of the upper wishbone attachment bolts, I pulled on the ratchet, nothing moved, I pulled harder, nothing continued to happen. I pulled harder still .... The ratchet slipped, my hand - with the ratchet, moved (quite fast) in a direction tangential to the axis of the bolt, fortunately there was something soft which stopped me hurting my hand. Unfortunately it was my face.

There was quite a lot of pain, some tears & a bit of blood. I walked myself into the house expecting to see a face like a balloon in the mirror. This proved not to be the case, but as I write, I have a swollen nose & a black eye. 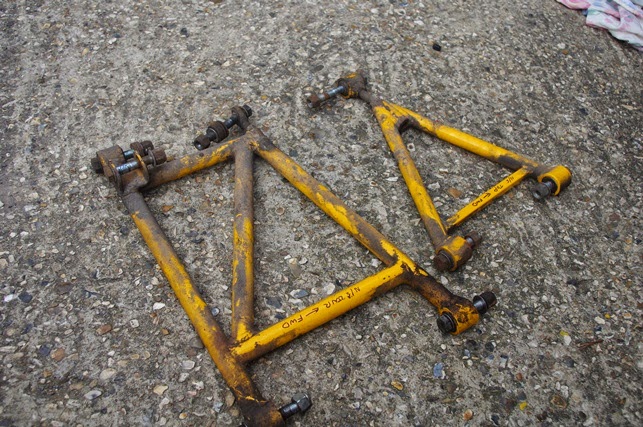 After the application of some cold water & a tissue, I returned to the garage & removed the wishbones. They proved to be less corroded than I'd feared, with the powder coat just being chipped off the outside ends & strangely the lower face of the rear tube of the lower wishbone - I guess that area picks up debris picked up from the tyres. I'll put some protective coating on it when it goes back on. I decided to begin with the wishbones as they were to hand. So I went at them with a wire blush, then a coat of yellow hammerite - not he same yellow as the plastic coat, but yellow never the less

So it's begun, the Fury is in bits & so far I have  badly cut finger & a black eye. Will the car be fit to see before I am? Only time will tell.
Posted by BlatterBeast at 21:13