Yes, after a week of popping out to the garage a bit, the Daytime Running Lights are fully functional, as are the spot lights. I've done some other jobs too & I only set fire to the car once!

The fire incident occurred after I sensibly looked at the connection diagram printed on the relay, then wired it up wrong, filled the garage with acrid smoke & set myself back 20 mins while I replaced the burnt out wire. 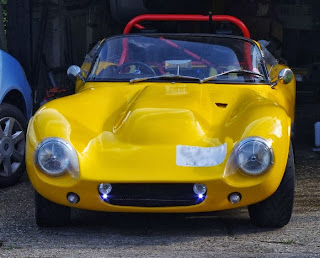 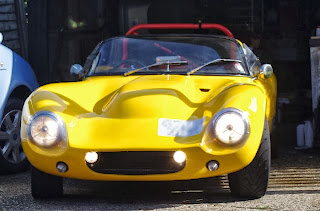 So, here they are, with ignition on, & with ignition & main beam on - powering up the side lights automatically turns off the DRLs. The DRLs look brighter than that in real life, so hopefully I'll be hitting the hooter less in future.

Other jobs I've done while the car's laid up:-

I've removed the speakers, I took out the stereo some time back, but now the speakers & their panels (1,287 grams) have been replaced by plain panels made from the finest leatherette encapsulated waffier-theen fibreglass (166 grams).

I've ordered an LED indicator relay & a set of four LED bulbs, the relay is also a little lighter, but the bulbs are almost certainly heavier, the idea is to get the flash-rate left & right to be the same & hopefully re-fit the much nicer "flat" Lucas lenses.

Also on the shopping list is a pair of LED sidelight bulbs. One of the sidelights was noticeably brighter than the other & when driving at night, the 40a alternator struggles a bit with the side, main & spot lamps on as well as the windscreen heater, so that's 10w it won't have to provide. As LEDs get more powerful & less expensive, I may swap the spot-light bulbs too, losing another 110w off the total.

One job I've been unable to complete because of the non-arrival of an 8-way connector is separating the speedo & tacho plugs from the main loom. Pulling those two (particularly the speedo one) usually results in pain, but a connector nearer the centre of the car should mean I can take the dash out with the loom still attached to the clocks.
Posted by BlatterBeast at 15:41