As you'll have realised, progress on the Fury has been painfully slow since I've been working abroad, but as reported last time, while investigating the alternator fault, I also found the resistor that takes (or in fact creates) a load on the alternator if the switch is switched, had some heat damage from an earlier wiring fault - that one caused by my own hand. Briefly, thinking the wire to the old Lucas alt. was too small a gauge, I'd added another wire, but to save time I'd run it to the starter motor. This meant the battery was directly connected to the resistor when the switch was switched off. A flat battery on a couple of occasions was the symptom & I soon realised the problem & corrected it, BUT, on taking the pod off to rectify the latest wiring problem I found this:- 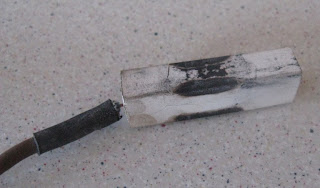 That's burn marks at the corners that is & it appears to be actual burning of the ceramic where it was touching the rubber lined P-clip. The rubber had solidified & chipped away & you may be able to see some cracks? There's a much bigger one along the length on the far side. So that's got pretty hot then. Fortunately the p-clip rubber didn't ignite or I'd have come out of work to a pile of ash.

So, that resistor's been discarded & there's a new one in it's place - this time mounted with locking wire, so it's a little more heat resistant.
Hopefully the ring gear I've ordered from the Ford dealer in Guilford will turn up in the week & I can get the car back together for the start of August.
Posted by BlatterBeast at 11:32