...... in SO many ways.
Firstly the working abroad is going well - thanks for asking - but flying out on a Monday morning & back on Thursday night is taxing when you're in your 50s. Feels odd to be doing proper aircraft design again after faffing with minor mods dressed up to look like something important. 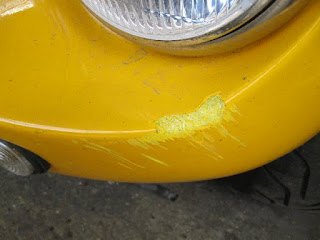 Next, is the repair to the Fury's front wing after I dropped it on the concrete drive. The wounds to my elbow & knees have almost healed - not so the bonnet, so - on to the repair. I had no idea how to go about this so the third use of the title refers to my repair attempts.

This is the sorry state of affairs when I began:- 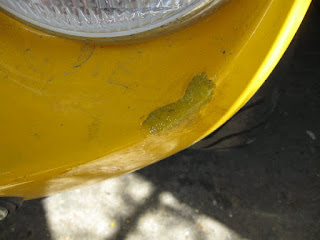 That's a great chunk of gelcoat missing altogether & some deep scratches around it I think the worst was taken by the winker lens which shattered, & the lamp cover which was tough enough to
withstand the impact. So, first job, fill the hole. Fortunately I had some surfacing fibreglass - almost like cotton wool, so I cut a couple of pieces of that to rough shape, made up some resin mix & daubed it in. Not having measured the quantities it was reluctant to cure, so a little more hardener was added & the new mix daubed on, then as usual the hot-air paint stripper was called into play & it went off in next to no time. 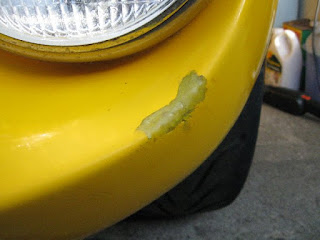 Then I smoothed it off with coarse, then fine, then wet wet&dry, so it looked like this:-

The profile was pretty good at this point, so out came the Dremel & I ground the main damaged area down & used a ball ended cutter to cut a groove where the cracks in the gelcoat were, so in theory all the damaged area was a little lower than the good surface & as rough as a rough thing to give a good key. 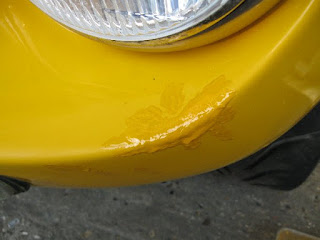 So I then made up some yellow goop - no science here either, just a dollop of yellow gelcoat, a glug of GRP resin & a splash of hardener. This was again daubed on, the heat gun used to skin it over, then more goop added in the low areas & repeat until satisfied. It's now curing off in the sun before I attack it with the wet&dry again. Maybe it'll work nicely, maybe not, but it'll look better than it did before & if next time you see the car it has inch wide black edging to the headlamp covers, you'll know why.