The Rallye Des Jonquilles – the Daffodil Rally 2013. After a tense week waiting to hear if my navigator would be fit, the news came through on Friday – and it was GOOD news. As I’d be up early on the Saturday, I slept downstairs – except that with the checking & re-checking of all the requirements, sleep eluded me until about 04:00.


Problem one, Mrs Blatter’s “pimp-mobile” (folding hard top) is in the middle of the drive. It’s quite a big drive, plenty of room for a car each side & space for the fury to pass between, but no - reverse & abandon has always been her policy, so back to the house, get her keys, move said car, return keys.


I arrived at Trev-the-Nav’s abode in time for a quick load & go, but I was offered a bacon sarnie & one doesn’t refuse that kind of hospitality lightly. On the road at last for a short hop round to Clackett Lane Services where the SKCC – weren’t. I sent a text message, but after 5 mins the throaty roar of two kits & the purr of a VX220 announced their arrival. A delay had ensued after Mrs Mango had a small “parking incident” while manoeuvring cars on the drive in a bleary eyed fashion. 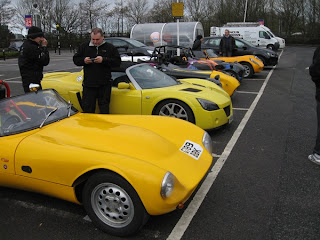 That accounted for four of the five, the missing man was soon located by phone – as luck would have it in the Clacketts fuel station, so we mounted up, found him & headed for our last rendezvous in the UK, Ashford Tesco, for a fuel stop & to meet Nash who had kindly offered to bring the specially printed tee shirts to meet us. It was here that my trip took a turn for the worse. Fuelled up & ready for the off, I hit the starter button & was rewarded with a hideous shriek & no movement of the engine at all. The starter sometimes plays up so I tried again – with the same result. That of course could’ve been the end of the trip, but the SKCC are not so easily thwarted & many hands made light work of bump starting the car – just as well as it looked as if they’d be doing it a lot this weekend!
﻿ After a short blatt along the motorway, we checked in for the tunnel, but I was concerned about the starter, so I hatched a plan so cunning, you could pin a tail on it & call it a weasel.


﻿﻿
﻿ If I drove down to the train at the head of the SKCC, then when we arrived en France we could wait for the tin-tops ahead to move, bump start the Fury, then the bump-starters would have time to mount up while I slowly trundled along the train, easy. Until the loader on the platform bizarrely asked me to pull alongside the train, then loaded the rest of the SKCC expeditionary force first, putting me at the back.
﻿﻿
However, we were not to be wrong-footed by such tomfoolery & soon the small group was running west along the coast road in brilliant SUNSHINE, at least I think that’s what it was, it’s been a while since I saw any. Our route slowly banked south through some smallish hills, keeping to the mirror flat, winding French roads. Little by little we turned east, heading for our first coffee stop at the “Garage Café”, a car themed establishment we’d been pointed at. We arrived at 13:00 on a Saturday lunchtime – it was closed. We moved on, eventually passing into Belgium, a change of country marked only by a small sign & a dramatic deterioration in the road surface. After a bone-shaking 1/2hr punctuated by the sat-nav trying to send us over a 10ft spoil-heap, we pulled into the small town of Diksmuide, where the locals took a great interest in the cars & guided us though the local parking procedure. There was a “tea room” not 20 yards from where we parked, so we did lunch – but without chips, they’re illegal after 14:00 apparently.


After we’d eaten & I’d disturbed the locals by setting off the Fury’s alarm, then having to be bump started, we drove a mile up the road to see some preserved trenches from the First World War. It 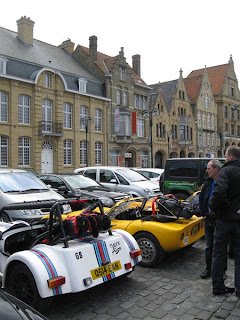 was a sombre & sobering moment, more so once the rain started. Two people in a Fury with the roof up isn’t a lot of fun, throw in the lousy Belgian road surface & a road closed for resurfacing & the journey to the hotel is best forgotten.


The hotel – all credit to Mr Mango, this was a real find, last year our accommodation was best described as “cheap”. A concrete block containing rooms with pre-fabricated everything including the complete shower / toilet room. To be fair it was clean & the parking was relatively secure, but personality? No. We got a taxi into town & had a lot of beer – all very blokey. This year a much higher proportion of us were ladies, so it was just as well that the accommodation was based around a very nice restaurant & the accommodation was in wooden lodges, spacious & nicely equipped (though I was glad I’d taken a travel kettle & coffee). We relaxed in the bar, we ate well (though – again – the English translation of the menu was at times more difficult to decipher than the French.


After a very pleasant evening, we retired to bed. Once again sleep proved elusive as I worried what I 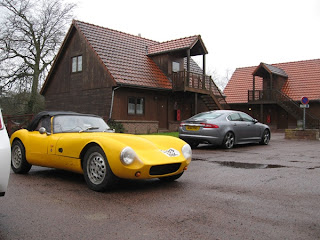 should do about the starter. Get it refurbed? Buy a new one? Buy a lightened flywheel & get a different clutch & starter to match? It was a jaded Blatter who prepped the car the next morning.


It had rained heavily in the night, but the soft top had done it’s job. It was rolled up, the luggage rack re-attached, side screens stowed & replaced by deflectors – for the clouds were lifting, the sky was brightening, the car started easily after only a brief push (bringing the reception lady running as only three of us had paid at that point). 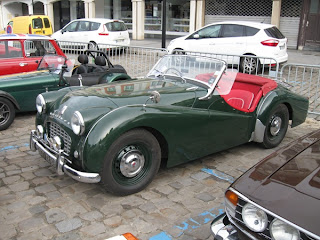 After a short drive through the countryside, we rolled into Aire-Sur-La-Lys town square & parked against the fence. After checking in, attaching the rallye plaque & having a coffee & croissant, I was again a man-with-a-plan, intending to move the barricade behind the Fury, bump start it along the road & come back in. Then one of the other SKCCers said “why don’t you just try it”, wise words indeed, I turned the key, I pushed the button, the engine started, I think the sun may even have come out.
The start is always a bit of a free-for-all, but as luck would have it we rolled into the start tent next to the Mangos & after a few words from Bruno the ever ebullient organiser-cum-master-of-ceremonies, we were waved off & immediately lost. Trev-the-nav was getting cross, but it was pretty easy to just drive about until an interesting car appeared & follow it until the instructions made sense. 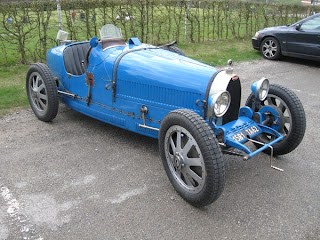 turning, though if we saw 50% of the numbers on sticks we were supposed to be looking for I’d be surprised. The mid-morning drinks stop was at a golf club. Approximately 320 mostly men arrived to find four of the five loos blocked! Out in the car park the sun shone on an eclectic array of cars, from a modern Jag on three wheels & a space-saver, through a whole herd of Elises & Exiges to, at the other end of the age & price scale what appeared to be an original Bugatti type 35, probably worth more than the rest of the cars put together. Joy of joys the Fury started & we headed back out into the countryside behind an MGB travelling slower than even MGBs generally do. The task for this section was to look at eight photos & mark the view you DIDN’T see as you wended your way. This proved near impossible last year, this year was no different, though we did see three & two were in a section we had to navigate round as the villagers were having a fete in the middle of the road, so only three to choose from – we got it wrong. After

Suitably fed & refreshed we headed off towards the finish, back in Aire-Sur-La-Lys. By this time the sun was blazing, the temperature had soared to 22c & I was getting a sunburnt head. The 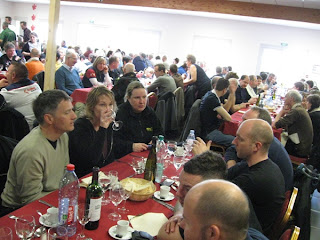 last section was all about the driving & navigating & while we came at the town square from completely the wrong direction, we were among the first back, so after a very brief chat with Bruno over the PA system, we parked up & watched the others arrive. Not surprisingly we won no prizes, though there was champagne (or at least fizzy wine) for all the competitors & after the speeches & the awarding of cups, we left, but not without the still enthusiastic Bruno appearing from no-where to shake our hands & wish us well. See you next year Bruno. 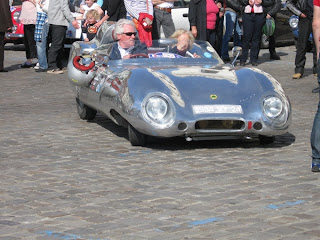 There was a little confusion over refuelling, the station on the route home was being dug up. Fortunately all the sat-navs took us to the same next nearest one where we re-fuelled & were talked at in French by some eleven year olds who followed us out to the road, one by one the cars put on a 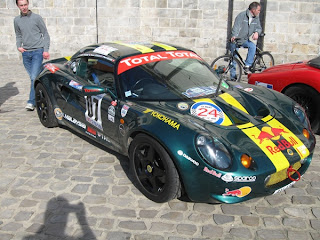 show of accelerating away, until it was my turn, luckily Trevor saw the Gendarmerie van – I hadn’t.


The run back to the train was nothing short of glorious. The sun beat down, the roads were smooth & twisty & the French either slowed to let us past, or joined in with our blatt for a few miles. Fantastic – it couldn’t last & all too soon we were sitting in a queue at passport control for 20mins which resulted in ……… the starter not turning the engine over. So it seems I have a heat issue. We boarded the train & I opened the bonnet hoping to cool the engine bay, until a French tunnelette flounced along & told me I had to close it because it would “interfere wiz ze ventilation” so I closed it – until she’d gone. We were all prepared to push start it in Blighty, but it turned & fired all by itself, which just left the interminably dull motorway home.


What a wonderful way to spend a weekend.
Posted by BlatterBeast at 09:33