Still In The Garage

Well the Fury may have been out a couple of times last week, but it's been very much garage-bound since. There's a couple of reasons for this. First it's still bloody freezing - I mean, come on, late March & still few days get above zero? There's 20ft snow drifts oop narth & no end in prospect.

The second reason was Mrs Blatter's job application. She's chasing a promotion & had an interview booked for today (Monday) at 09:00. Last Friday at 09:00 she got an e-mail saying they wanted a presentation on the future of her dept as part of the interview. My wife doesn't work Fridays & was lucky she checked her e-mail. Upshot - we spent the whole weekend preparing said presentation, Mrs Blatter doing the words, myself driving powerpoint (my wife is not an IT guru). 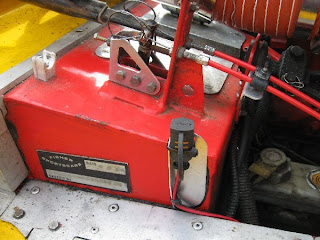 However, there is a little news from Furyworld, on Friday I made up a throttle open-stop as I'd managed to pull the cables though the adjusters during a WOT (Wide Open Throttle) overtake manoeuvre. This consisted of a bent up bracket with a bolt & a couple of nuts. I also fitted the socket for the new battery charger. I want this in the car eventually so I don't have to raise the bonnet to connect it, but that'll have to wait until next time the dash is out, so for now it's on a bracket sikaflexed to the side of the pedal box. 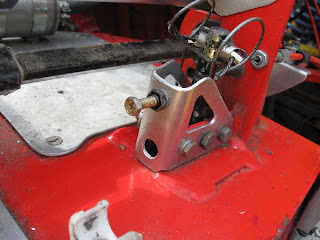 Then I fitted the old NACA duct to the new bonnet. There's a load of verbage about the original in this very organ about a year ago, but having glued it to the car I realised I ran out of resin when I last did some GRP work, so can't finish the bonding on until later in the week. Still, it should be sorted for the Rallye - which has a certain symmetry as that's what it got sorted for last year.
Posted by BlatterBeast at 12:36