After a week of -3deg, followed by lashing rain, I have at last got out to the garage & got on with the job in hand. With the distractions of the dash changes out of the way, I focused at last on the alternator bracket. The lumps of extrusion have been sat in their tube waiting patiently for some time. 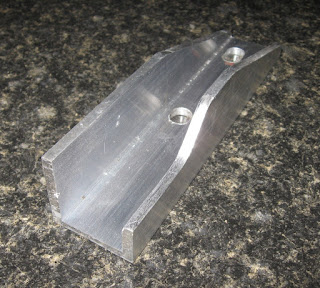 I cut a lump off, drilled it to match the engine - almost (I had to slot the rear hole) & shaped the two flanges. When it's nearer completion I'll cut some lightening holes as it's the stiffness I need, so there's some weight I can remove.

I also started the engine (no alternator or water pump) just to give it a rotate, & a bit of a warm. It sounded goooood & the exhaust didn't rattle.

In other news, it's the SKCC Christmas breakfast breakfast tomorrow. I was planning on taking the increasingly pink Zafira, but fortunately I checked my work e-mail (in case there was some good news on the contract we're waiting on - there wasn't) & there was an e-mail from the two Davids asking if I'd like to tag along with them - which is nice. I've only ever been in one screenless car before, it was the Fury demo car, it had a BIG deflector & it was in the spring. How I get on with next-to-no deflector & no helmet in the middle of December, I'll report tomorrow.
Posted by BlatterBeast at 16:49