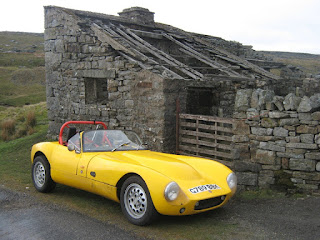 Day 3 led us back across the moors, but this time heading south west, & for the only time on the trip it rained, not much, but enough to need the roof on the car. We started with a re-fuel, & headed out. We hadn’t been going long when there was a ping – ting – thud from under my car. Last time this happened I found out some time later that it was a brake calliper bolt detaching, so I pulled over & checked all the important bolts I could find – they were all still there. I pulled away, & checked the mirror, expecting Mr Mango to appear, but of him there was no sign. I stopped & waited. Still nothing. I turned round & went back, cresting the hill I saw the unmistakable sign of a Fury bonnet raised. As I’d departed, he’d turned the key to find that absolutely nothing happened, no starter, no lights, nothing.

All it needed was the battery terminals cleaning up & Matijs arrived as this was being done & soon we were once again blatting through the somewhat bleak (but majestic) scenery, stopping from time to time as photo opportunities presented themselves – there is after all the SKCC photo competition to be considered.to be honest we could’ve stopped for a photo at almost every corner, so we had to ration ourselves, but even then we arrived at the lunch stop as everyone else was finishing. Next on the agenda was a short detour to take in the Ribblehead viaduct, A spectacular piece of Victorian architecture, but the only way to get a decent picture was to take the cars along what to describe it as a dirt track, would be a dis-service to farm tracks the length& breadth of the country, rutted & pot-holed, the Furies were not the ideal vehicles to traverse what I would describe as a “green lane” were it not for the fact it was chalky white. But we got to a good vantage point with our sumps & suspension unmolested, took some spectacular photos & headed back to where Mattijs had waited – deciding (probably wisely) that his sole means of transport was more important to him than a couple of pictures. 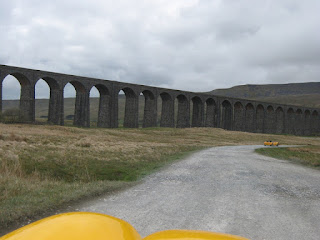 So the day went on, more stunning roads, more stunning moor. The wide open, sweeping bends punctuated by tight & steep almost Alpine sections down into valleys where a small village would echo to the sound of three not terribly well muffled sports cars, then up the other side & away.  So we eventually wended our way into Blackpool. Ah Blackpool – what can I say that hasn’t already been said. It sits between the spectacular beach & spectacular moorland like a prominent tattoo on a pretty girl – kind of interesting in it’s own right, but the whole would be so much better without it. All human life was there – mostly shouting & whooping. The hotel itself was to the north of the town & if I said it was built in the style of a castle, I’d be stretching a point to say the least, it was a concrete edifice with crenellations & “NOR  RE  K CAS  LE” writ large on it. To be fair, it was clean enough, but with rooms numbering hundreds, the service was never going to be personal in the same way last night’s hostelry was, & the food was more “canteen” than “Cordon Bleu” but it sufficed. Of course my enthusiasm for it may have been tempered by the fact that my ankle was now REALLY hurting, because my shoe was rubbing, so I ate my tea & went to bed.