Good news first, The ECU wiring is just about complete. I've wired up the injectors, though I didn’t put the pins in the connectors until I’ve confirmed they don’t have a “way-round-ness” (polarity – that’s the word). Then the coolant temp sensor, cooling fan, fuel pump & then bundled & sleeved the wires. Electrickery done, I moved on to the fuel system, finished off a pipe from the pump to the fuel filter, found a route for the return line, then went indoors for a rest. What all this means is that I’m almost ready to try & start it (ish). 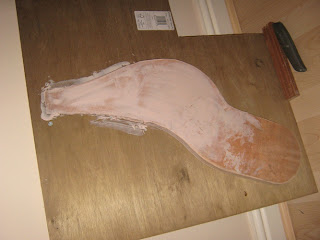 On Saturday I did the last of the tidying up behind the dash, & re-fitted the transmission tunnel side panel, then mostly re-fitted the dash. Today I finished off fitting the dash, took the cam cover off, dribbled the cams with pre-lube, took the spark plugs out & turned it over in an attempt to get oil pressure, BUT the oil light remained resolutely on & the gauge didn’t move a millimetre, so it looks like I’ll have to take the sump off & see what’s going on in there (sigh). In amongst all this I also fixed the two parts of the NACA intake mould together & put the first layer of filler on it.
Having got all disheartened by the lack of oil pressure I went indoors but returned to the garage later & made up the heat shields for the top of the pod & the tailpipe outlet. Again these didn’t go as well as they could, obviously not having a good today. 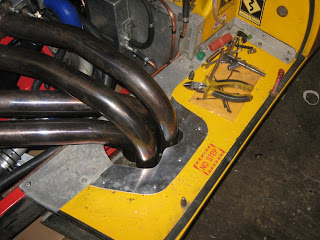 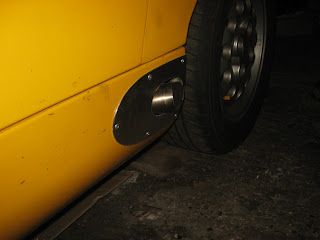